Social Media – the greatest weapon of BJP in 2019 elections The power of social media has been growing tremendously with the increase of internet penetration. The way information is communicated has changed drastically. Mediums like leaflets, pamphlets, wall paintings, hanging banners, etc. no longer generate connections as people have started to follow gifs, meme, infographics, videos and other formats of information communication more enthusiastically. Social Media facilitates the spread of these contents swiftly with reactions of other people and even replies of the authentic person without much delay. Besides, social media also helps to find like-minded people and circulates the content that people are interested in. Hence, it has been a platform to spend a greater amount of time for local people as well as the marketers/advertisers.

The trend of using social media in election campaign is said to have started from Barack Obama, for the US presidential election in 2008 for the first time. He primarily focused on Facebook and Twitter to share his views, introduce his platform and interact with potential voters. There were reports, which suggested that his team had mined the social media footprints of Americans, created psychometric profiles of individual voters and used that to appeal voters with tailor-made content. Many regard his iconic victory to his impactful social media presence. “Were it not for the Internet, Barack Obama would not be President.

His footprint was followed by Narendra Modi, in 2014 elections to a greater extent and they got a huge success. Even during the assembly elections, 2017, in Nepal, Sajha Bibeksheel Party used social media much creatively to influence the voters towards electing better leaders for Nepal.

But the way, Narendra Modi led BJP used social media in 2019 elections took the role of social media influence to greater heights and proved Digital Marketing for politics immensely powerful and indispensable for success in elections in today’s age!

As sources report, realizing the power of social media from his first election campaign, BJP started to campaign for its next election right from mid-2015 following the AIDA principle,

Attention: towards the party’s actions, Awareness about its political agenda, Guiding ideologies and key leaders,

Interest: in their activities,

Desire: for making the right decision and

This approach was well planned and started early enough to get ample users on the platform before the right time approached to get benefits. Several official and unofficial pages were built to disseminate information and build and a pool of audiences.

2.  Target Everyone, But in a segmented manner

BJP understood well that there are different kind of people with different interest and motivation level. Contents were created accordingly for first time voters, repeat voters, thinkers and influencers, observers, the marginal communities to name a few.

Their digital marketing team very well understood the role of emotions in guiding the voting behavior, and their digital campaigns demonstrated that fact very well. The fear of taking the wrong decision, aspiration of seeing a better India, a brighter flourishing future for themselves, experiencing the ego boost and happiness from making right political choices were some of the dominant emotions that BJP’s digital marketing strategy undertook.

BJP took several innovative approaches to keep people informed about their accomplishment and how previous government had failed at several instances.

5.  Be Present Everywhere to be visible and remembered

They were tactical to explore all the platforms available. Starting from Facebook, Instagram, Twitter and WhatsApp which takes 95% of social media app usage in India, they even leveraged the platforms such as SnapChat, TikTok etc. to reach every people possible.

As it is well known that organic reach is not sufficient, they have invested nearly about INR. 20 crores for political ads on Google, Facebook and other sister platforms of the companies, reach people of all segments with variety of contents for better engagement. Refer to the report below from Facebook’s Ad Library Report 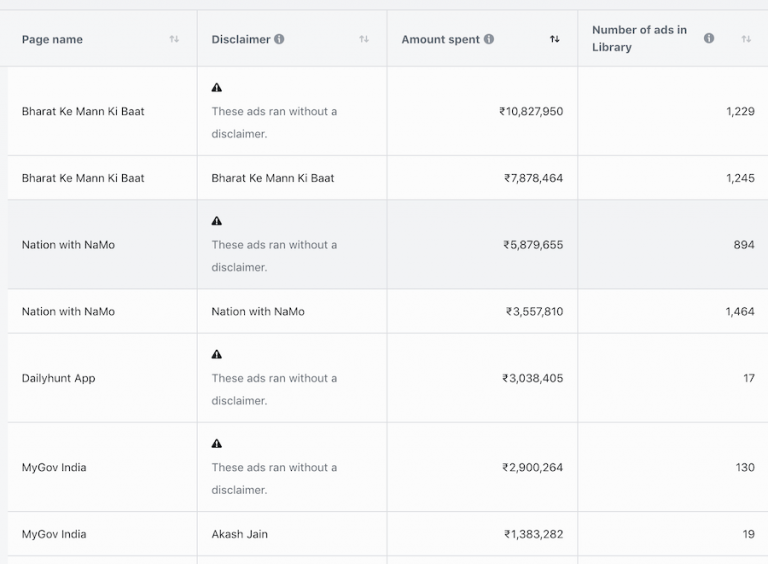 The offline marketing efforts were as robust as the online efforts. As per sources, they had active volunteers at different levels and some even trained from the internet giants like Facebook and Google to devise the best strategy. Once, a user liked a shawl posted their Facebook wall and wished for it, the next day it was delivered to him/her. Their efforts were well synced.

So, what were the actual strategies opted?

The tactics used several pages to disseminate the information. Some of the pages were official whereas there were innumerable unofficial pages created by the supporters to spread the messages across. “The Government of India” talked about the government’s works and achievements, and spread the feeling of transparency. “My First Vote for Modi” page, is a well thought name to influence the youngsters to make them feel how much their first vote counts and it should not go to a wrong person whether be in the name of caste, creed or anything. “Bharat Man ki Baat” was dedicated to share the views of prime minister. It also urged people to keep their problems and it was ensured that they are heard. Similarly, Modi 11 was totally based on influencing people to create a group and move forward to advocate for the government.

Besides, the party also created several regional based pages and created post in the local languages. They also provoked the local people using strong contents as mentioned below. 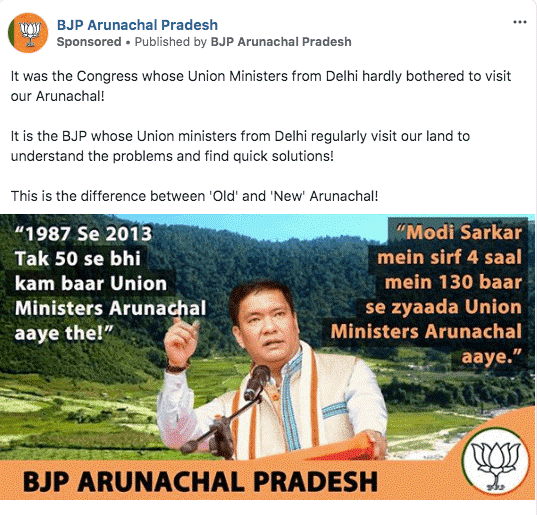 As for content creation formats, they’ve been very ambitious, aggressive and invested in all types – right from static designs, to videos, live videos, memes, comic strips and infographics. They have used consistent colors and tones to ensure proper branding and delivery of clear, high impacting messages.

Along with facts and achievements in favor, they also used a significant storytelling approach in their communication to capture the attention of different focus groups. The digital team of BJP worked extensively on videos and lives videos – a move backed by pure logic and facts, in a localized environment to facilitate easy data access for all.

According to sources, roughly 23,000 to 25,000 groups were created for the purpose. As 256 members are only allowed per groups, multiple groups might have been created. This has much impacted in dissemination of messages quickly as most people in India use WhatsApp and believe in the information shared across the platform in person. The power of the platform was amplified from the last election in MP.

Majority of the voters in India are youths so how could the government miss the sentiments and engagements of the youth? Several posts which depicted the success of the government were used to ask questions and the winners were given merchandise which if they used would further urge for brand advocacy. 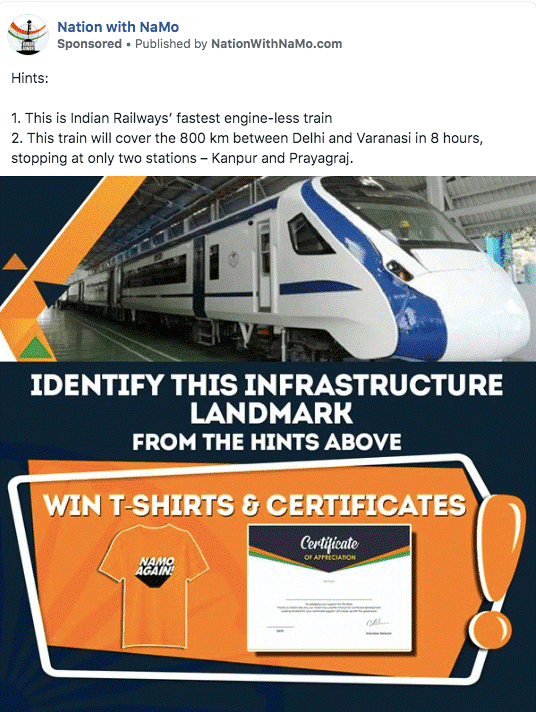 The social media handler of BJP well understood that rather than some political figure speaking out, if the local people started speaking for the brand, it would create more differences. The initiatives like “Bharat Mann Ki Baat” and “MainbhiChowkidaar” created a great buzz and led people to speak in favor of BJP. The opposition also striked with #Chowkidaarchorhai and #Chowkidaarhichorhai but it again turned out to help BJP as supporters burst into war and came out with several contents and creative This post from Narendra Modi where he changed his name to Chowkidaar Narendra Modi, followed by  other BJP leaders changing their names to chowkidaar provoked people to join the cause and this cause was one of the most noticed and successful strategies amongst all.

Apart from the direct social media, they also used Digital Rath in Delhi NCR where they showed the government’s achievement and failure of the past government. Free Wifi hotspot was also used for which password was “Kerjriwalfailedtogivefreewifi”. This was a direct take on the opponent.

A team was strongly dedicated to find out what people were talking about BJP, what remarks other leaders were making and what was the sentiment that could be provoked for the benefit of BJP.

The contents as frequent as 7-10 posts per day were created to keep users engaged and speaking for Modi’s support.

Hence, the well exercised digital strategies contributed to make people count on the positive changes brought and impact this government could create in the future. People in this election forgot all the factors like caste, creed, dynasty, religion and voted for future of India which they were portrayed.

The landslide victory is really remarkable and has been possible greatly due to digital strategies adopted to keep people informed, motivated and emotionally provoked.

We aim to disseminate what we know in subjects relating to integrated marketing that includes digital marketing, advertising, content creation and marketing, public relations, branding, events managements, web solutions, video/photography, corporate social responsibility, etc. that might help you remain informed. Drop in your feedbacks. We are happy to improve; always!

The Washington Post: “Social media is a key battleground in India’s elections — and Modi is currently king”

IndiaToday: “Did BJP's #MainBhiChowkidar win the social media war? Or was it Congress's #ChowkidarChorHai? Find out”

As the internet has become an integral part of everyday life, its use as a marketing medium is necessary. Internet marketing demonstrates the trends o... 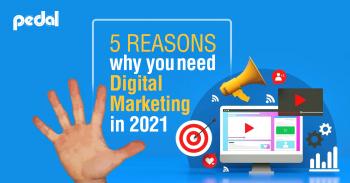 5 reasons why you need digital marketing in 2021?

As we advance along with the evolution of technology, it has changed the way businesses operate where the marketplace is becoming more digital. While... Content Marketing is a Strategy of digital marketing which involves constantly creating and distributing valuable and relevant content that creates en... Customers are the cornerstone for the success of any business. As customers have too many options available these days, there is a higher probability...